What is Karak Chai? 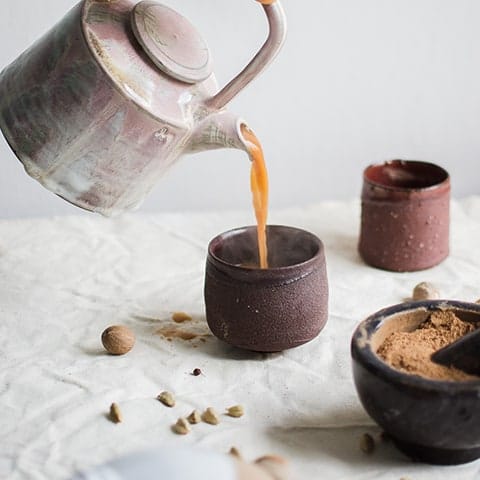 Around the world it is estimated that two billion people wake up and have their morning cup of tea. We wanted to explore what other types of tea people are waking up to, and found a popular tea is the Karak Chai – A tea that is sweet, delicious, and good for the soul.

Indian Karak Chai tea or Masala Chai is an aromatic, spiced tea with milk that is famous worldwide for its unique taste. Widely enjoyed in India, Pakistan, Qatar, UAE and in Middle Eastern and Arabic countries where it’s generally called as Kadak or Karak Tea. Known widely for its delicious blend of spices that lend to its unique flavor, Karak Chai has made a statement on the world stage. As the UAE’s most popular hot beverage, you will find cafes serving Karak Chai throughout the day and night.

What is Karak chai tea made from?
Karak Chai tea can vary depending on the region in which it is consumed, but in general, they contain the following ingredients:
● Milk (whole, condensed or evaporated milk)
● Water
● Sugar
● Spices – Cardamom, Ginger and Cinnamon
● A strong black tea base, such as Birchall Great Rift Breakfast Tea.

Birchall are very proud of our deliciously strong breakfast tea bags bursting with flavour, a winner at the Great Taste Awards for a record 9 years in a row.

Some Karak Chai recipes can differ and call for an added ingredients such as:

What does Karak Chai mean?
Karak roughly translates to ‘strong’ and Chai means ‘tea’. Karak chai is thick, flavourful and caramel coloured – much stronger than the regular cup of tea.

Is Karak Chai tea healthy?
Typical Karak tea has a high sugar content but if you consider the nutritional benefits with not much added sugar, like many teas, karak tea can improve the digestive process and can keep your gut healthy. The spice in the tea, cardamom and ginger have antibacterial properties that prevent digestive problems. Ginger has anti-inflammatory properties and aids digestion by improving circulation and delivering oxygen to organs so they can perform optimally. For centuries, Cardamom has been a staple of Tibetan medicine as it contains vitamin C and other nutrients that keep your immune system healthy.

Where does Karak Chai tea come from?
Karak tea or Masala tea has long been served by chaiwalas as a traditional Indian street drink and normally poured with great dexterity and skill from arm’s length into a small, stout glass. With origins from South Asia, the tea brought over from the Indian subcontinent in the 1960s as people, seeking a life in a new land, arrived in their droves, it’s a drink that is traditionally served in the morning, alongside a biscuit or two.

Is Karak Chai and Masala Chai tea the same as Chai tea?
The main difference between Chai and Masala tea is the addition of spices. Masala and Karak chai tea traditionally combine a stronger black tea, creamier milk and more ginger and exotic warm spices and herbs. “Chai is black tea and hot milk, while Masala tea will combine black tea, milk and a few spices.” (Tea 101 Tea box, What is Chai tea?)

What is the best recipe for Karak Chair and Masala Chai tea?
We found Dishoom’s signature Masla Chai to be the tastiest. In Dishoom’s recipe, fresh ginger, black peppercorns, cinnamon, cardamom and cloves are used to infuse with brewed loose black tea, before whole milk and sugar are added.

Give Dishoom’s signature tea a try with the recipe below:

METHOD:
1. Place the tea, ginger and spices into a saucepan, pour over 1 litre boiling water and bring to the boil.
2. Lower the heat and simmer until you can smell the spices, about 10 minutes.
3. Add the sugar and milk, turn up the heat and bring back to the boil.
4. Allow 10 minutes, stirring occasionally. (A skin will form, but this is strained off at the end.)
5. Taste to see if the chai is to your liking; boil a little more if you want a stronger flavour. Strain, discard the solids and serve immediately.

Dishoom: From Bombay With Love by Messrs Shamil Thakrar, Kavi Thakrar and Naved Nasir is published by Bloomsbury.